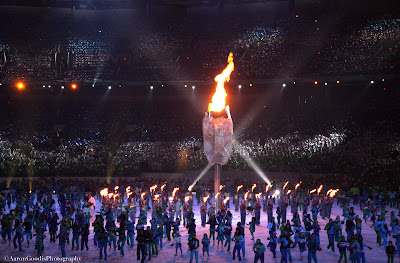 2010 Vancouver Winter Olympics. A high ISO of 1600 was used to increase my shutter speed allowing me to shoot hand held in a dimly lit location. 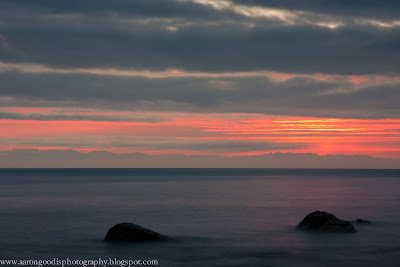 Sun Set, North Vancouver. shot with an ISO of 100. The image is nice and smooth, no grain. 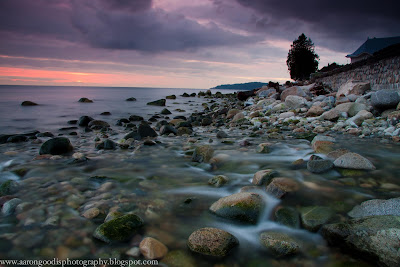 Sun Set at Coho Creek, North Vancouver, shot with an ISO of 100. to aid in a long exposure and help with low grain. Nice and smooth, great for printing!
Better Photo Techniques Part 2 - Understanding ISO
All of our digital cameras have an ISO setting, most point and shoot small cameras will decide this for you in automatic mode. If we are using cameras that will allow us to set the ISO to a desired number than we need to understand what ISO is in order to take full advantage of this feature. So what is ISO. ISO stands for International Standards Organization but more importantly what does it mean and how does it benefit us with our photography. For those of us who have shot film we may remember ASA, this was labeled on the film canister and it refers to the speed of the film, so ASA 100 film was a slow film and that meant longer exposure time and also cleaner smoother images. As the ASA of the film increased the film becomes faster and there for allows for faster shutter speeds especially in low light. This is beneficial for those shooting fast action sports or trying to shoot hand held in dimly lit environments such as concerts. So back to ISO on digital cameras, ISO is digital ASA and is by definition the film or in this case the camera sensor's sensitivity to light as it enters through the lens. Most digital cameras offer a wide ISO range usually from 100-6400. Like film the lower the ISO is set, the slower the shutter speed will be and vice versa, the higher the ISO is set the faster the shutter speed.
There are advantages to using your ISO correctly for instance if you are shooting a land scape and a slow shutter is required than a low ISO of 100 will help you with two critical things, the first is a slow shutter and second is silky smooth grain free images, great for print! On the other hand if you need a faster shutter speed for shooting hand held in low light or you may need to speed up your exposure to stop an action shot than you can increase your ISO but be warned on any camera with exception to the highest level pro body's you will start to see visible grain, usable yes but weak when it comes to printing. The Tip here is to shoot at the lowest ISO possible unless the situation demands an increase of shutter speed. ISO from 100 to 400 is recommended!
I know I said that Part 2 would be Depth of Field but this topic was on my mind, so the D.O.F.
will be covered in part 3. Hope you enjoy and can use the tips when out shooting your own photos!
Posted by Aaron Goodis at 3:34 PM